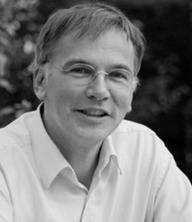 Joachim O. Rädler is a professor for experimental physics at the Ludwig-Maximilians-University (LMU), and holds the Chair for Soft Condensed Matter. He studied physics at the Friedrich Wilhelms University Bonn, at Cambridge University (UK) and at the Technical University of Munich. In 1993, he received his doctoral degree in biophysics for his work on vesicle adhesion under the guidance of Erich Sackmann. As a post-doctoral fellow during 1993-1996, he studied cationic lipid-DNA complexes with Cyrus Safinya at UC Santa Barbara. Rädler received his habilitation in experimental physics at the Technical University of Munich, where he worked on supported membranes. In 2000, he was appointed senior group leader at the Max Planck Institute for Polymer Research. He was named full professor at LMU in 2001 and became a member of the Center for NanoScience in the same year. From 2008-2011 he held a temporary consulting and teaching position for experimental NanoBio physics at the University College Dublin. He served as spokesperson of the Center for NanoScience at LMU, of the collaborative research center "Nanoagents" (SFB1032) and of various graduate programs. He is author or co-author of over 186 publications on research topics in soft matter and biophysics, physical chemistry, chemical physics, bioengineering and bionanotechnology. His current research focuses on the self-assembly of siRNA and mRNA lipid nanoparticles, the interaction of nanomaterials with living cells, time resolved studies of single cell gene expression and the physics of cell migration.

more records under researchID and ORCID